We have now been married four weeks just gone – we received our wedding photo’s today and now I am overcome with emotion. Our wonderful photographer, Andy Chambers, captured our day perfectly… and I want to do it all over again!
One of my friends from work said I should write down all I can remember from the day, as it went so fast, so I thought I would share some of my memories here.

I was up early on the morning of the wedding, 5am to be exact! I had slept in my old bedroom at my parents house and shared it with my little sister, as it is now her room! It reminded us of Christmas mornings when we would wait to go and wake up Mum and Dad. I was so nervous, not to get married to Ross, but if the day would go to plan. Three and a half years of planning had come down to this!
After a cup of tea and a pastry that I managed to force down, the bridesmaids began arriving at 7am. My Aunty was a bridesmaid and my hairstylist so she got to work first and a friend of hers came to do my other bridesmaids hair. Sitting around with my family and my two best friends was so memorable and lovely. My make-up artist came shortly after and I must say she did an incredible job! Everyone looked amazing and my make-up literally stayed in place all day, even after all my tears! I highly recommend ‘Beauty by Laura‘, based in Suffolk. People were still complimenting my make-up by the end of the night! 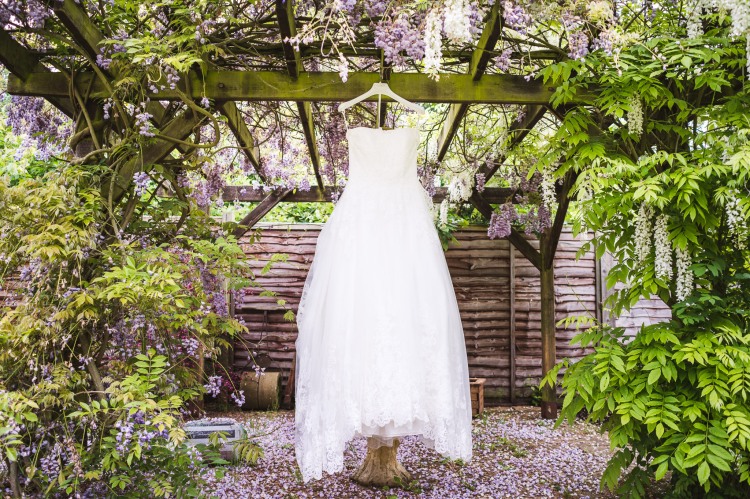 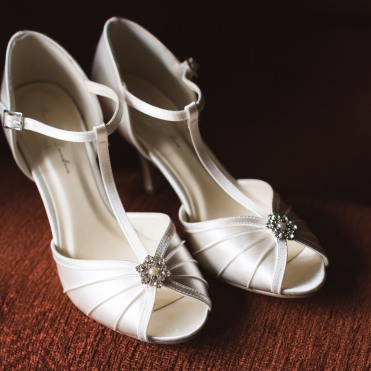 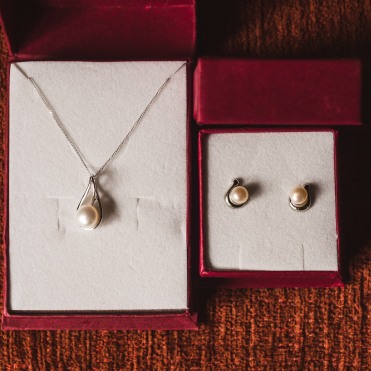 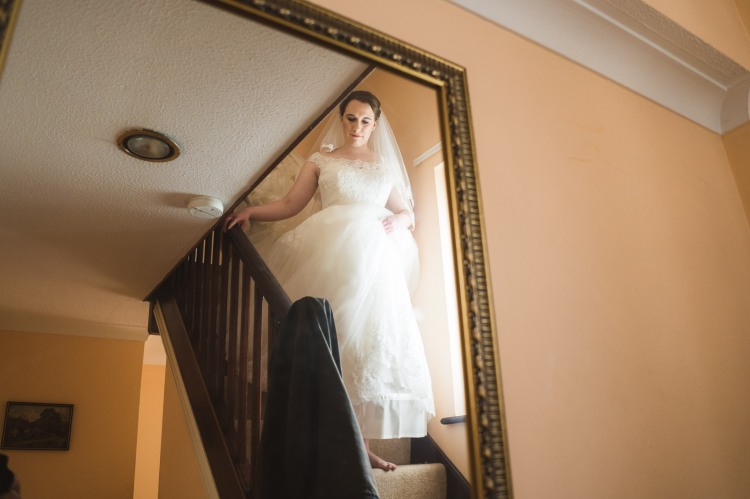 Getting into my dress was very surreal, again being in my old bedroom that I grew up in. My Aunty and my Mum helped me into it and got me down the stairs, and Polly, my bridesmaid, helped me put my shoes on! Everyone was very surprised in my choice of dress, thinking that I would be in something vintage inspired, instead of my… more princess inspired dress! I had spotted this dress in the window of the Suffolk Bridal Company just after the Christmas of 2016. Mum and I popped in a few weeks later to try some different styles on and I mentioned to the ladies in the shop the dress I had seen in the window. They saved it until I had tried on the others I had picked out – I completely fell in love with it and bought it then and there. It really was the one! 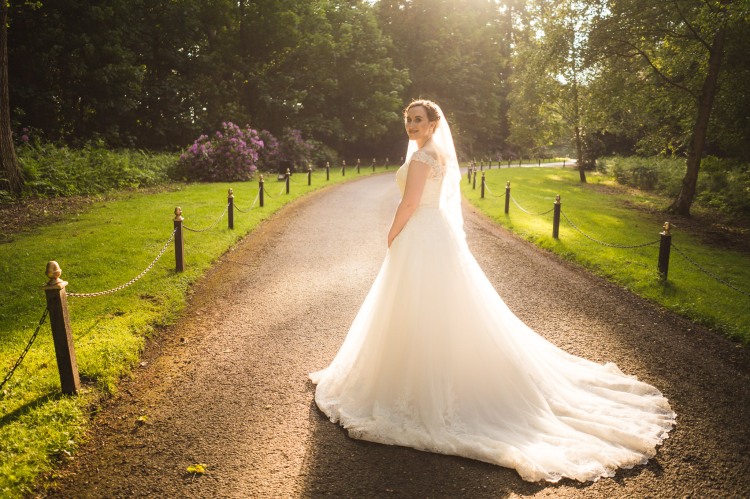 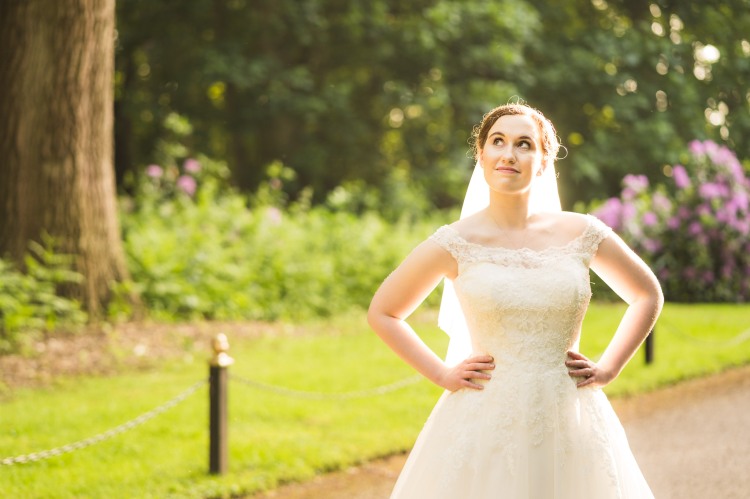 The car arrived to take my Mum and the bridesmaids to the church first, leaving me and Dad to wait… He kept trying to say how beautiful I was and how proud he was, but I had to keep stopping him, so I didn’t cry!
It had been drizzling rain on and off all morning, but as soon as it was time to get in the car, the sun began to shine and did not stop!
We were actually early when we got in the car, so the driver took us around town until it was time to go to church. It was really special to spend the time with Dad in the car, going around and waving at people! It gave me time to breathe and take it all in. The morning had been going slow but it was now starting to speed up… 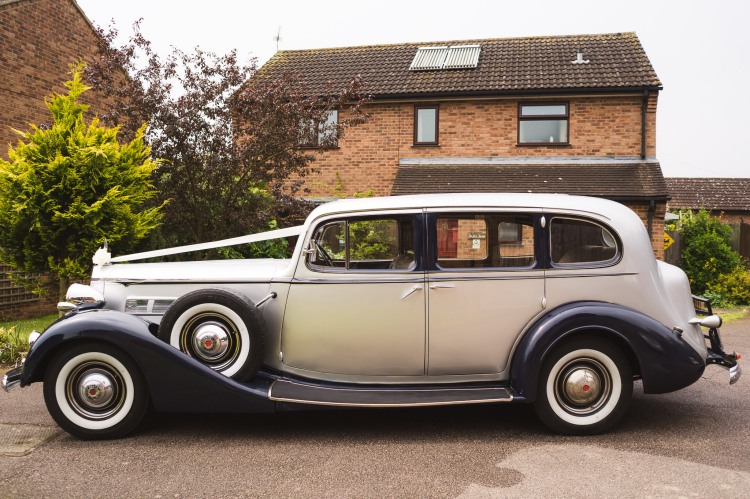 Walking into the church and seeing all our family and friends just took my breath away! Walking down the aisle with Dad was so special, even if I was trying to not step on my dress! As soon as I got to the altar and stood with Ross, the tears well and truly started! The service was beautiful and perfect. The second hymn was ‘The Lord is My Shepherd’, my Grandad’s favourite and was also sung at my grandparents wedding! As soon as the organ started playing, the tears kept on flowing; it was so meaningful to me. 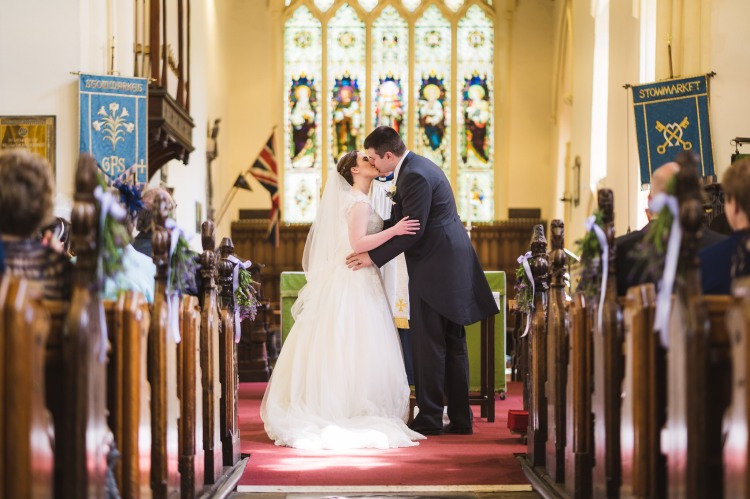 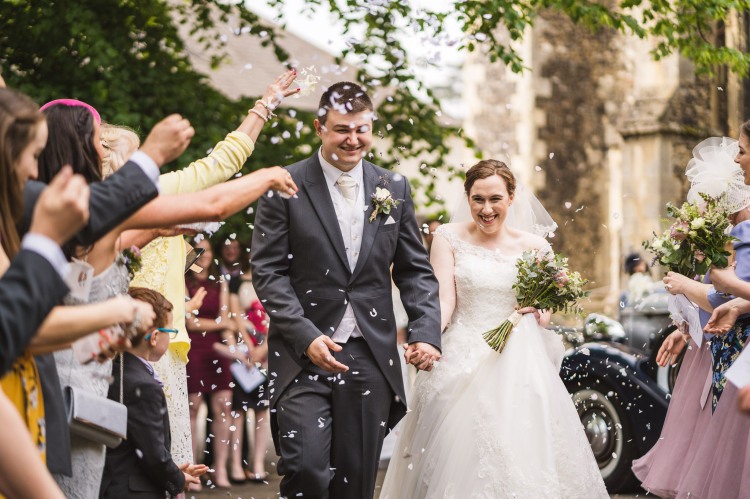 Outside the church, we had time to take our formal photos with our family and friends, as well as chat to everyone, and of course get the confetti shot!

After a while, it was time to move on to Ravenwood Hall, near Bury St Edmunds – where Ross works as Sous Chef! This venue was particularly special, not just because the setting and the Hall is beautiful, but also because we know the staff and I have worked with some of them for a couple of shifts over Christmas.
Ross and I had some time to sit in the car, with Champagne and chat about our mornings. Then we took the scenic route to the Hall, the sun was shining over the Suffolk countryside, it was a magical ride!
When we arrived at the venue, all our guests were enjoying pimms in the garden – it was just what we wanted to happen. We were announced into the venue for our wedding breakfast as Mr and Mrs Cook! 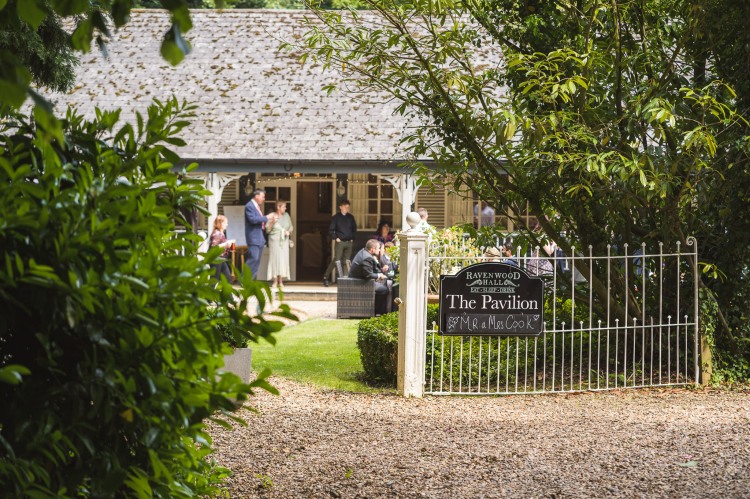 We were unable to set up the venue ourselves, as there was a wedding the night before, but the staff had done everything perfectly. Our colour scheme was lavenders and lilacs (my favourites!) and the theme was music. Ross and I go to a lot of concerts and music is a big part of our story, so it was only right to incorporate this into our day. Our table names were songs that we have listened to from the start of our relationship and so were printed on vinyl records and displayed on the tables. We had also made a playlist to be played during the meal, which was another special element for both of us as we sat eating and singing along to our favourite songs! 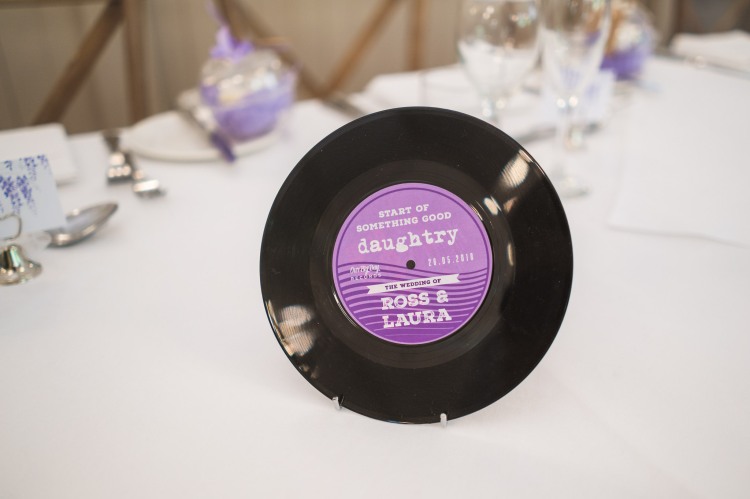 The meal itself was delicious, but the speeches that followed were emotional and hilarious! My Dad went first and I couldn’t stop crying as he talked about my career and love of animals from a young age, to him going away to sea (a big part of my life growing up) and his influence in my music taste. Ross spoke about his friends, known as his ‘second family’, his own family and our relationship. Then was the best man’s turn. Rob’s speech was brilliant, because it was so funny! There is a fantastic photo which depicts the moment he starts mentioning lap dances at the stag do… 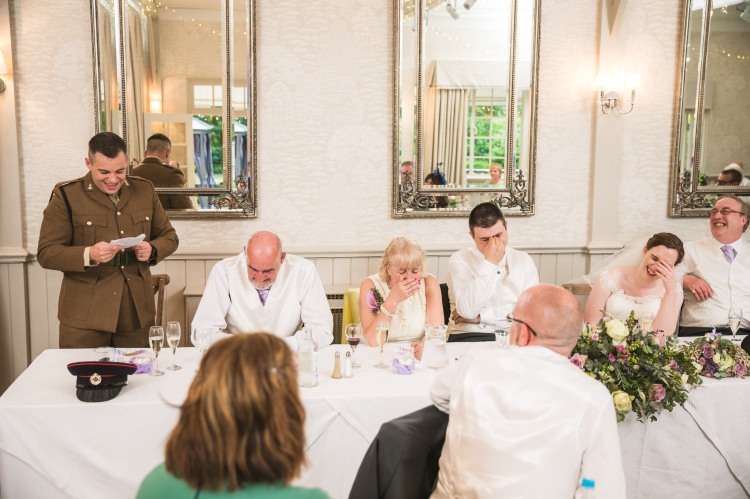 But the best part that is still being talked about is when he began to sing. It is quite well-known among his friends that Ross does not like James Blunt. I also just want to clarify that I do like James Blunt and used to listen to him a fair amount in my younger years! Anyway, Bob began to sing ‘You’re Beautiful’ and the room joined in! It really was the funniest moment! 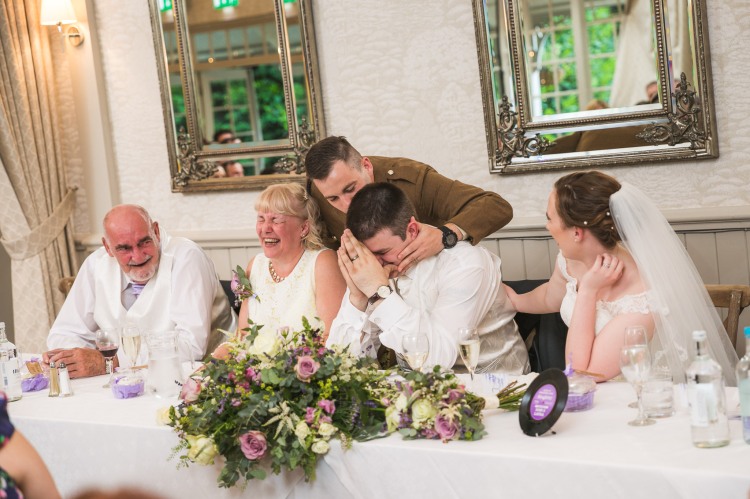 The afternoon was spent drinking in the sun and trying to speak with everyone. I felt like I was running around all afternoon to try and catch everyone but I barely sat down to enjoy their company! Even by the end of the night, there were still people I hadn’t actually spoken to. If I had to do the day again, and I so desperately want to, I would have sat down in the garden and relaxed a bit more and let people come to me!

I greeted the evening guests and then it was time to cut the cake. After this, it was planned that a video of our engagement would play on the big screen at the end of the room, which did happen but there was no sound on the speakers, just being played out of the laptop! This was disappointing but most of the guests would have seen this video on our Facebook pages anyway, but considering this was the only hiccup of the day, I can’t complain too much!

Our first dance played after the video ended, which was the song performed in the video – Start of Something Good by Daughtry. We always knew this would be our first dance, as the song was released just before we began our relationship 6 years ago and the words ring very true with both of us. My dress was quite difficult to dance in, and apart from Ross standing on it, I think we managed quite well. Ross did have a little cry, which wasn’t helped with me singing the lyrics to him while we danced! 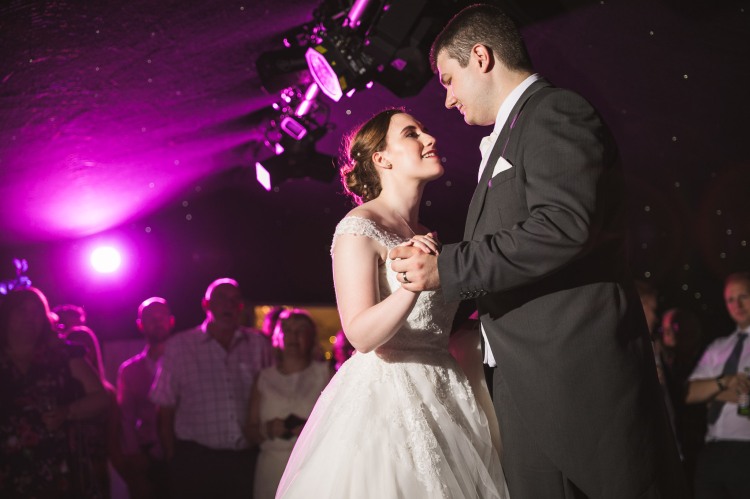 The disco was fantastic and it seemed almost everyone was on the dance floor! Again, I wanted to chat with everyone, but I also wanted to dance the night away too! I think I managed to do both of those things.

I did cry and cry when the disco finished and it was time to say goodbye, I didn’t want the day to end! Ross and I sat up til late in our room, going through our gifts and cards and I was still crying!

We both agree, our day was perfect and we wouldn’t have had it any other way. I am so grateful for the incredible images we have to remember our day from Andy Chambers and we are awaiting our wedding video from our videographer, which I’m sure will be a couple of weeks more to wait. The day really did go so fast but I have some amazing memories, most of which were captured, that I will cherish forever. 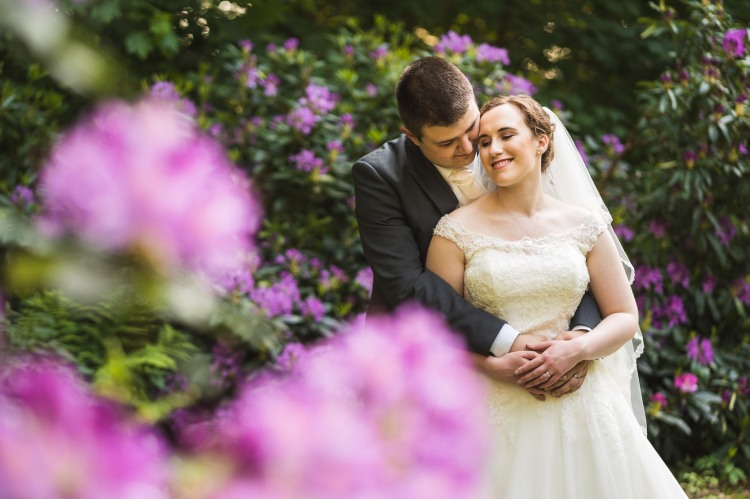 6 thoughts on “Our Wedding Day”